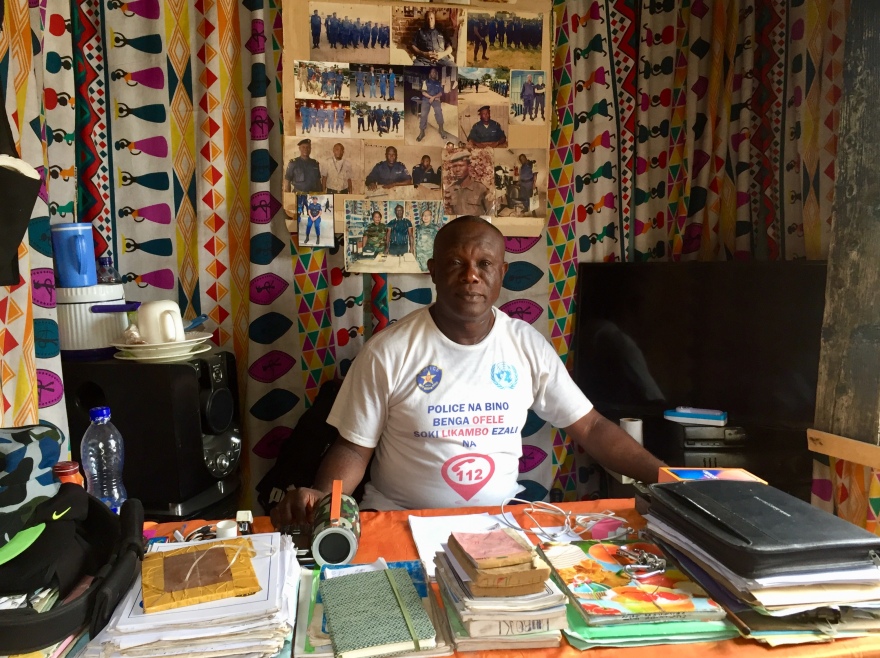 Project Summary: Funded by the Swiss National Science Foundation (FNS), the project ‘Localizing International Security Sector Reform: A Micro-sociology of Policing in Urban Congo’ proposes to take on a critical outlook on the EU Police Reform (EUPOL) implemented in the Democratic Republic of Congo (DRC) from 2007 to 2014. Based on the existing specialized literature and previously – but partial and under-exploited – collected data in Kinshasa from 2014 and 2016, this research argues EUPOL (and its international personnel) might have failed to ensure their stated programme objective of ensuring a  ‘locally-owned’ reform process because of the enduring theoretical and empirical assumptions found within many international interventionist schemes that tend to privilege an understanding of the (Weberian, western) state from a formal, institutional angle that does not reflect the real ‘life-world’ of security governance and policing in the DRC. This in turn demonstrates the ‘state’, and by the same token, governance, is not a pre-existing apparatus existing ‘out there’ but is instead a performative and ideational process constituted by ‘all of us’ and deeply entrenched within a large array of ordinary, private and public societal actors. In so doing, this project thus proposes to investigate the everyday texture of police-citizen relationships in Kinshasa (DRC) via ethnographic and other qualitative methodological tools while exploring the rhetorics, values and practices EUPOL has employed to design and implement its project. This is done so as to move beyond the habitually either top-down or bottom-up approaches of externally-led intervention that seldom begin from the intellectual premises that both macro and micro levels of authority are mutually constituted and that the public sphere of state action is co and re-produced by private citizens, interpersonal relations and intimate interactions: in other words, “the public is private”.

From this, this research project will be presenting a micro-sociology of policing and unearth the everyday practices and broader interactions and meaning-making processes of police-citizen relations while theorizing further security governance, and in broader terms, the state’s ideal-typical monopoly over the means of violence, as a heterogeneous ensemble of socio-material agencies and connections whose ramifications run beyond traditional scalar understandings of social relations (international/national/local) and the limitative dichotomies that still qualify much of contemporary state theory (formal/informal, public/private, modern/traditional etc). Overall, the project will thus aim to A) provide a fine-grained analysis of the daily micro-practices and extended interactions shaping the relationships between low-level police officers and ordinary urbanites and, B) against this background, analyze the conceptual and programmatic gaps that have pervaded EUPOL’s attempts at reforming the Congo’s National Police. This project thus has both practical and theoretical concerns in mind. It hopes to offer three key contributions to the fields of IR, Political Sciences and other related fields: 1) offer empirical expertise on the performative and ideational dimensions of security governance in urban DRC, 2) present an innovative critical approach to transnational conceptualizations of governance in fragile states and beyond, and 3) provide new knowledge and practical avenues to policy-makers engaging in future SSR programming in non-western environments.

1) Due to the COVID-19 situation, the FNS has agreed to extand my project until the end of February 2021.

2) I presented parts of my project and some of its tentative findings based on my 2-month long fieldwork period conducted between October and December 2019 in Kinshasa, at a Research Workshop, organzied by Prof. Tom de Herdt at the IOB, University of Antwerp, on April 16, 2020. Take a look at the presentation here.

3) See my preliminary mapping of Urban Governance through the District (Commune) of Kinshasa, that localizes all my collected data on Police posts and stations and in/formal local administration, including neighborhood chiefs (in all neighborhoods) and street chiefs (in 2 neighborhoods so far).